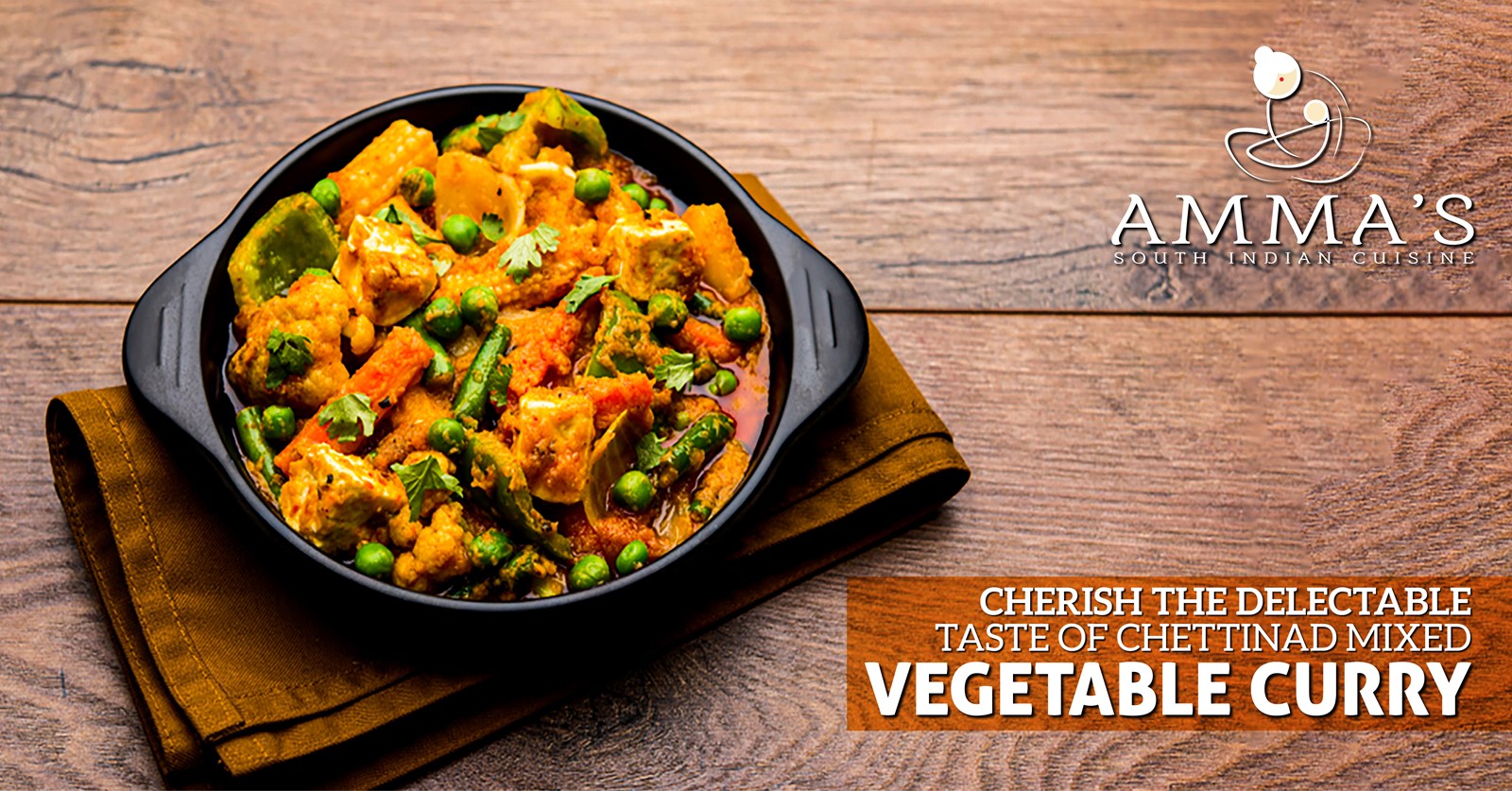 To satisfy our taste buds and balance the health benefits according to our weather circumstances, we cook veggies in various combinations of a meal, such as mild and spicy. Poriyal, Avial, Perattal, Mandi, and Pachadi are Koottu, Poriyal, Avial, Perattal, Mandi, and Pachadi. The mixed vegetable dish is a tasty and nutritious side dish to serve with Roti or plain cooked rice and a side of rasam or sambar. Vitamins, minerals, phytochemical substances, and dietary fibre are all found in vegetables, making them beneficial to human health. Antioxidant vitamins (vitamins A, C, and E) and dietary fiber levels, in particular, play a vital role in human health. Adequate vegetable diet helps protect against chronic diseases like diabetes, cancer, obesity, metabolic syndrome, and cardiovascular disease, as well as improve risk factors associated with these conditions.

Most of the Chettinad dishes are flavored with entire spices, particularly black pepper and chilies. While there won’t be any blatantly crimson gravies or curries, you’ll definitely feel the heat. The cuisine is notable for its spice blends and the usage of coconut in a variety of forms, including as grated  added to poriyals, and as coconut milk as wet masala to cool things down. Though the spices used in various recipes have the same scent, flavor, and taste, the aroma, flavor, and taste they impart to the food are vastly different.

It is equally remarkable to recreate fierce and pungent flavors with some fresh vegetables.  Kalpasi is a prominent Chettinad spice that is used in many Chettinad recipes. It has a bark-like appearance but is spongy and has little flavor when smelled on its own. When you add it to a mixed vegetable curry, however, you have a fantastic mixed vegetable curry that doesn’t require any more spices or masala.

Chettinad mixed vegetable curry found on many Indian restaurant menus is a well-known gastronomic delight of Chettinad. It is so simple to make with less effort and gets ready in less than an hour. Delectable and Aromatic Freshly Ground spices makes this dish truly delicious. This dish is purely vegan, gluten free plant -based South Indian curry. The spice blend used in this cuisine provides intense flavor to the dish and one can feel the pronounced depth of flavors and aroma.

Visit your nearest Amma’s South Indian restaurant and indulge yourself in the real taste of Chettinad Mixed vegetable curry.

This Chicken Saag Curry has one of the most developed tastes and packs a punch! The spinach gives a hint of acidity to the meal while also contributing to its overall rich flavor. Chicken is high in protein, and spinach is high in vitamins and minerals such as calcium, foliate, lutein, and vitamin E. This boosts the nutritional value of the dish. Moreover, the greens are anti-inflammatory and high in fiber,and hence this dish is a great way to integrate vegetables into the diet of someone who doesn’t generally consume them.

Chicken Saag is creamy, saucy, and delicious. The texture of the spinach gravy or sauce is semi-thick. In Punjabi, the word “saag” refers to all leafy greens, including spinach, sarson (mustard greens), bathua, and methi. Though saag chicken is a winter dish, it can be served any time of year because it can be made with any greens you have on hand.

However, the saag is usually made with five different lush green vegetables. Mustard greens (sarson), Chenopodium/Goosefoot leaves (called bathua in Hindi), Spinach (palak), White Radish Root and Greens (mooli), and Fenugreek are the ingredients (methi). The spicy, bitter mustard greens provide the main flavour in this saag recipe. The sharpness of the mustard and methi is lessened by the addition of spinach, bathua, and radish, resulting in a creamy, mellow saag that is simply exploding with flavour.

In India, winter is the season for both mustard and bathua. As a result, sarson ka saag is considered a cold-weather dish in North India, particularly in Punjab, where this traditional recipe originates. Sarson da saag as Saag Chicken is known in Punjab is commonly served with makki ki roti  which is flat bread made from maize flour and is not only filling but also warms the palette and body. Sarson ka saag is a bowl full of antioxidants and phytonutrients thanks to all of the dark, leafy greens, so that extra butter topping is fine. For added flavour, the saag is generally served with sliced or chopped onions and green chilies.